Beatrix was the only daughter of Princess and Ivy in 2011 at the Radisson. It was Ivy’s and Princess’ second nesting together and they produced four chicks who we named after famous conservationists – Beatrix (Potter), (Rachel) Carson, (Tom) Cade and (Richard) Fyfe. Ever the adventurer (not unlike her namesake), our Beatrix found herself at the bottom of the old Eaton’s (no longer in operation) smokestack downtown shortly after fledging. Discovered by a crew doing renovations in the basement, her rescue was easy and as she was completely uninjured, she was returned to the Radisson nestbox and reunited with her brothers the next day. Beatrix and her family migrated out of the province late August/early September 2011.

Given the high mortality rate in the first year of life, we were delighted when Beatrix reappeared in the fall of 2013. We found her catching giant water bugs in mid-air. A high protein but disgusting meal but ever so cool to watch. She was gone a few days later only to return again in the spring of 2014. She paired up with Beau in West Winnipeg when the previous resident female Jules failed to return. They were a beautiful pair, she made nesting look easy and Beau was more relaxed with her than he ever was with the more highly agitated and high maintenance Jules (no offence to Jules). They had four chicks – Beaumont, Bishop, Bristol and Belle – all of whom fledged effortlessly. In 2015 Beatrix returned again this time pairing with Ty who had been nesting outside Winnipeg for a couple of years. Ty and Beau had a dispute over the West Winnipeg nestsite and unfortunately, Beau lost. Ty and Beatrix quickly settled down to successfully raise two female chicks – Tiggy and Tuppence. Tuppence fledged without incident but Tiggy developed an impacted crop which was successfully treated and she was returned to the West Winnipeg territory in time to migrate out in the fall. 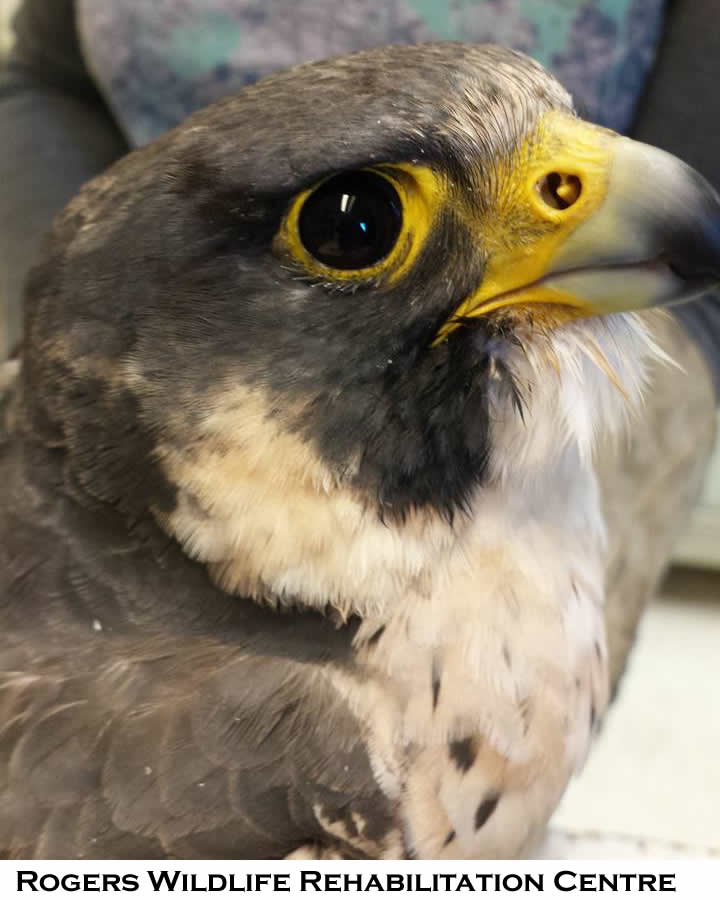 In March of 2016, the Project received a message that Beatrix had run afoul of a hail storm in the Dallas/Fort Worth area and was in the care of rehabber Kathy Rogers at the Rogers Wildlife Rehabilitation Centre. There were initially concerned that her eyesight had been affected, but after a visit from an ophthalmic specialist she was given the all clear. Then it was just a case of letting some soft tissue injuries heal and getting her flight skills back up to a point where she could be released to continue her journey north. Given the timing it was unlikely she’d make it back up here if a new female turned up to claim her nestsite but if she missed the nesting season, it would just give her more time to hunt and rest up for the next year. Soft tissue injuries always take a bit of time to heal and Beatrix was fussy about food in care and the weather started turning hot and hairy (tornadoes, more hail) so she had to spend more time inside for her protection and her flight condition deteriorated. Knowing her rehabilitation was not progressing as everyone would like, we began the long task of arranging for permits to get her back to Winnipeg and into the care of Lisa Tretiak and the folks at the Prairie Wildlife Rehabilitation Centre. We have worked for years with Lisa and she was willing to take on the longer-term rehabilitation we know Beatrix would need. Six months after we started the paperwork, we had export permits from the state of Texas and the US federal government and import permits from the Manitoba and Canadian government plus a transit permit for her to short stop in Ontario on her way to Winnipeg. Two days later, Beatrix arrived (with a passport) at Richardson International Airport with Kathy as her travelling companion and we finally got her settled at PWRC for hopefully the beginning of the last phase of her recovery. 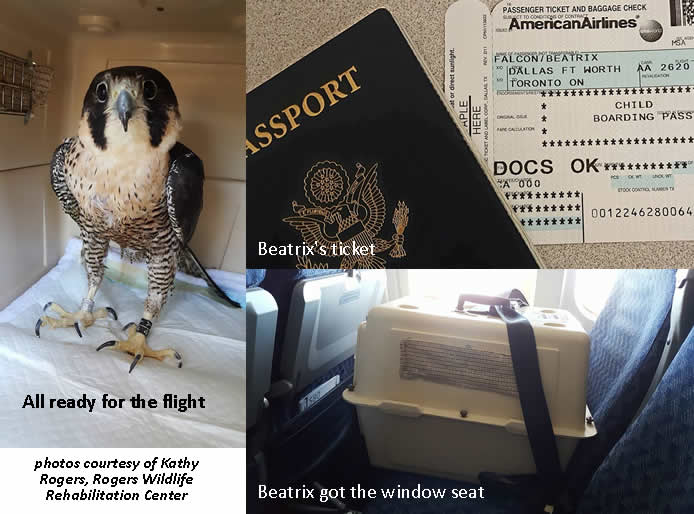 Peregrines usually come in two flavours when it comes to being held in captivity: tolerant and not tolerant. Beatrix was the latter but she was tough and a fighter and we planned to work with those two qualities to get her back into the wild as quickly as we could. Her flight condition was as described and she had a foot infection which hadn’t responded well to antibiotics. First order of business was to get her settled, assess all her health concerns and begin treatment as soon as possible, which in this case meant surgery to clear out as much of the infection in her feet as possible. Then treat with medication to prevent re-occurrence and wait for her feet to heal and then work on her rehabilitation and plan for her release back into the wild. Simple enough plan but rarely are do things go as planned. Beatrix’s infections continued to resist the antibiotics so follow up surgeries and other treatments were required. We brought in quail to ensure she had the best possible food to aid in her recovery and we waited to see how she would respond knowing it would take time. Progress was as expected slow – her infections continued to be a problem and then her feet weren’t healing as we wanted and regular wound therapy became a part of her weekly routine. 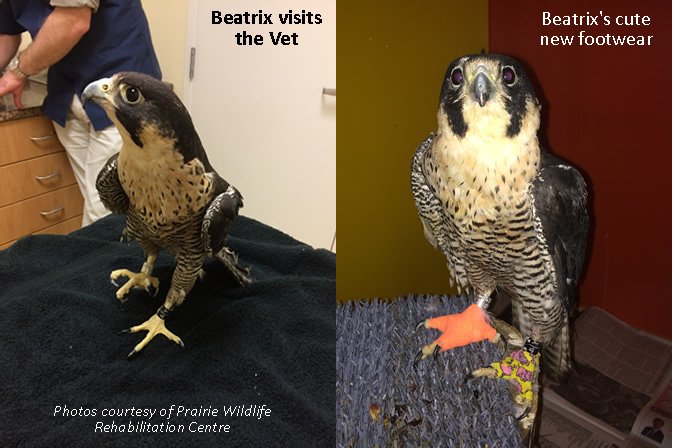 So one year, one month and one week after she returned home, those in charge of her care and welfare made the very difficult decision to euthanize her. Her foot infections had reappeared and the stress of being so long in care was impacting her ability to heal. Her quality of life had deteriorated and there was no way to say that it would or could improve despite our best efforts. Stress can as easily kill a peregrine as can an injury. Continuing to treat her was now not a kindness in the long or short term. After a year of extraordinarily dedicated treatment and care, a decision had to be made as to what was in her best interest. It was not the happy ending we had hoped for her but it was the kindest one we could give her. 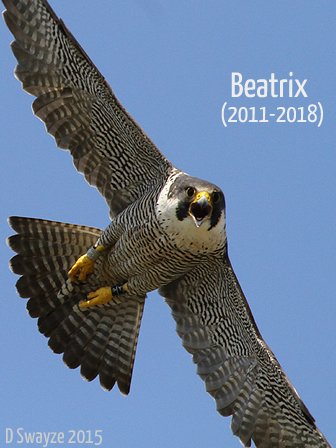 We have had more than our fair share of peregrine deaths over the last year. That is sometimes the way of it when you work with wildlife. I will miss Joli after so many years of dodging her attacks at the Logan nestsite. I will miss Bristol who was just starting out and doing it well like her mom. I will miss having the opportunity to see what Beaumont would have brought to the table given who his parents and grandparents were. I will miss Beatrix most of all though. We worked hard for her and hoped that that hard work would be successful and that in and of itself would be enough to make her loss difficult. But remember banding her then four weeks later opening the door at the base of the Eaton’s smokestack and having her hiss at me (again) in defiance. I remember her glaring at me when I picked her and her brother Carson up from rehab to rejoin their brother Cade at the Radisson after her smokestack adventure. I remember watching her sitting quietly with Carson on the edge of the nestbox in the evening light. I remember watching her showing off the hunting skills she’ inherited from her father as she caught water bugs in mid-air. Just a few months later, Beatrix was back and I had a whole summer to watch her effortless become the West Winnipeg female, so much like her mother. Beatrix was a serene mate – a nice change for Beau and a complement to Ty. She and her mates fit well, they were comfortable, extremely competent, protective and successful. With Princess getting older, having a daughter of Princess that was so much like her mother was a good sign for the future of Manitoba’s peregrines. She was the best of all things peregrine – charismatic, capable and courageous.

I will remember her and miss watching for her.