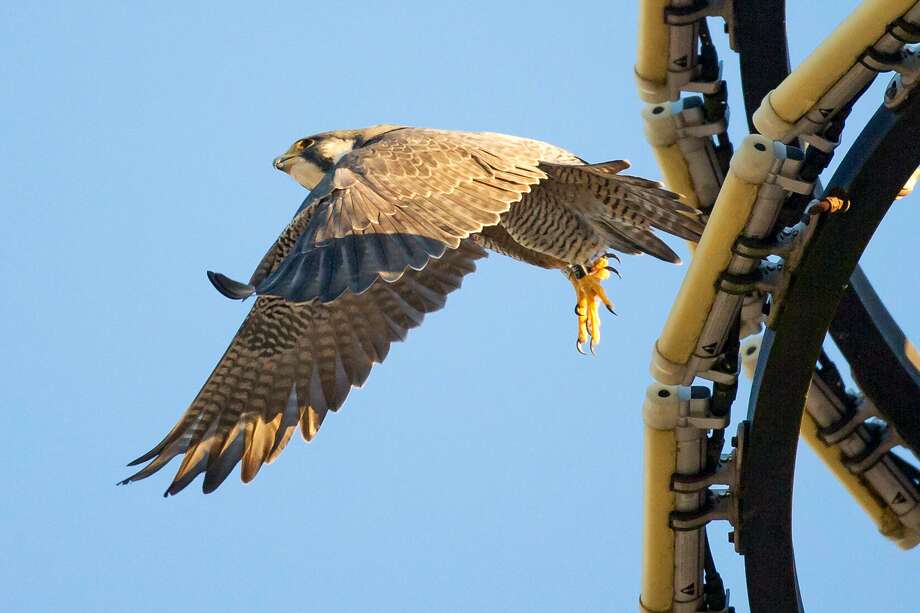 Radisson launching herself off the Drury Tower in San Antonio, Texas

Mystery solved. Turns out the two peregrine falcons who have been spending the winter months in downtown San Antonio are well known in their hometowns in Canada and Minnesota. They even have names: Radisson and Triumph. The two falcons, who have been thrilling tourists and downtown dwellers as they soar between tall buildings, were identified by the bands on their legs. Named after the Radisson Hotel in downtown Winnipeg, Manitoba, where she was hatched on the roof, the female falcon lives at a Canadian university in Edmonton, Alberta, during most of the year. Triumph, the male falcon, was born at the Mayo Clinic in Rochester, Minnesota; his permanent home is in Minneapolis. She’s a stately 12 years old; he’s a comparative youngster at 4.

Since early January, the two migrating peregrine falcons have been living primarily on the circular spiral tower on top of the 24-story Drury Plaza Hotel. They have been seen near the Tower Life Building and other structures. Wednesday, the raptors were seen perched atop the Frost Bank sunburst logo. Soon the raptors, who aren’t related, will be heading back to their permanent homes for the spring breeding season. Peregrine falcons mate for life and the San Antonio visitors’ mates will meet them back home.

The identities of the birds of prey were discovered after local bird enthusiasts sent out inquiries to fellow birders, to the U.S. Fish and Wildlife Service and falcon release programs. In a matter of days, the Manitoba Peregrine Falcon Recovery Project had claimed them. While the two birds aren’t related, their family histories do intersect, said Tracy Maconachie of the falcon recovery project. Fifteen years ago, Radisson’s mother was hatched at the Excel Riverside Power Plant, several miles from the Multifoods Tower in downtown Minneapolis, where Triumph has nested for the past two years. It’s the same site where the Canadian falcon’s great-grandmother hatched 30 years ago. “Now, these two have San Antonio in common,” Maconachie said.

The interest in the raptors began days into the new year, when avid bird watcher Lance Aldridge, working in Judge Melisa Skinner’s 290th court, called attorney and raptor enthusiast John Economidy after glimpsing the falcons zipping past his window pursuing their prey. Recently, Aldridge looked out of his courthouse window and saw the falcons narrowly miss catching a pigeon atop the City Municipal Plaza Building. Later that day, he looked up at the Drury tower to see feathers from the birds’ lunch drifting through the air.

Many raptor recovery projects have placed nest boxes on high ledges on roof tops to help with their survival in urban settings. Economidy would like to have small gravel-base nest boxes, secured with metal clamps, installed on downtown buildings, as has been done on buildings at the University of Texas at Austin and other in cities, including New York and Chicago. “I think it would be good for San Antonio,” he said, “it works for others.” Aldridge said officials at the Drury recently agreed to reserve a spot on the roof for a nest box. He’s also e-mailed the city of San Antonio and management at the Tower Life building about the same proposal. “I would love for them to stick around and be here year round,” he said, “and nest boxes are the next step to having that happen. Every one is really getting interested in this. They’re doing a service to San Antonio, as well as being magnificent birds flying in the sky.”

San Antonio is the first stop for Manitoba’s peregrine falcons as they make their way home more than 1,400 miles away. Radisson has been the most successful resident to nest at the University of Alberta in Edmonton since 2008. Each year, most of Radisson’s extended family wing their way through Texas to Mexico. A few years ago, one of her sisters was identified at the San Antonio Airport and, in spring 2016, another sister was found seriously injured after a hailstorm in North Texas. She recovered at a rehabilitation center in the Dallas-Fort Worth area. “We hope that Radisson has an uneventful time in San Antonio,” she wrote in an email, “so that she is in good shape to return to Edmonton to nest again this spring.”

Peregrine falcons are reported to be the fastest animal on the planet, with hunting speeds exceeding 200 mph. Average life span is 12-15 years, experts say. According to the U.S. Fish & Wildlife Service, there are between 2,000 and 3,000 breeding pairs of American peregrine falcons in the United States, Canada and Mexico. DDT use as a pesticide from the 1940s through the 1060s nearly caused the extinction of the species in North America. In 1970, the peregrine falcon was on the threatened and endangered species list. In 1981, the Manitoba Peregrine Falcon Recovery Project began reintroducing peregrine falcons in Canada with the release of four captive-bred chicks. By 1999, with help by The Peregrine Fund, falcon recovery projects and wildlife services across the United States and Canada, the falcon was lifted from the federal endangered species list. 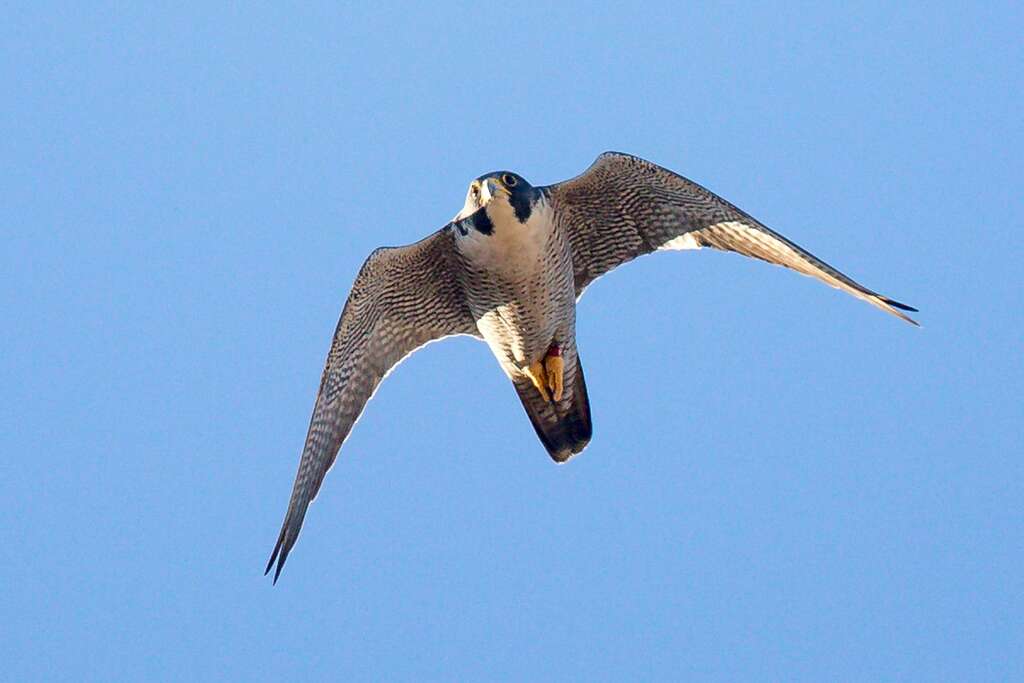 Julie Ponder, executive director of The Raptor Center at the University of Minnesota, said it was exciting to learn about the whereabouts of Triumph, one of the falcons from their restoration project. The Midwest group banded and took samples for genetic testing from the founders, the ones used to reestablish the population. Each spring, they make a strong effort to document, identify and band all the chicks hatched in the Midwest region. She said that the caring capacity of peregrines is higher now than it ever was historically. “The Mayo Clinic is a very actively watched nest box,” Ponder said. “The patients and staff at the clinic watch it, it’s a very high-profile site, they would be very excited to find out that one of their boys is in San Antonio.”